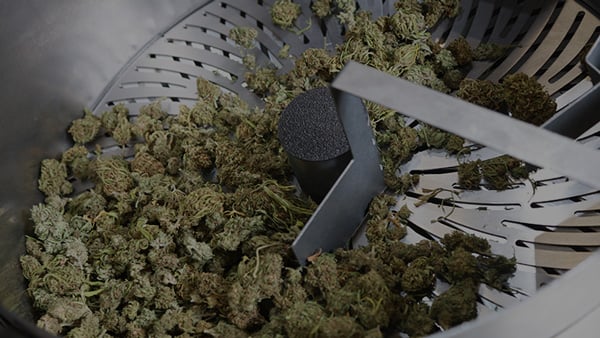 Many commercial cannabis growers prefer dry trimming machines when it comes to harvesting their buds, but automated trimmers are still very new to the world of cannabis.

Cannabis has been cultivated for thousands of years using a wide variety of methods and for an array of different purposes. The earliest known cultivation of cannabis occurred over 7,000 years ago in China, yet humans did not invent shears until centuries later. Today, we have more generally accepted best practices that cannabis growers use to guide their work, like drying, curing, and carefully trimming. Throughout history, however, people across the world have cultivated cannabis in ways less familiar to contemporary cannabis culture.


Around 900 AD, hashish, a psychoactive product made from cannabis, had gained widespread popularity in Arabia. In order to harvest hashish, or hash, traditional cultivators rub living plants’ flowering buds between their palms in order to remove and collect the trichomes that cover the plant and hold much of its THC. While this is not trimming, it is one of the oldest cannabis cultivation methods known to the world. Today, most hashish is made by rubbing dried plants over fine mesh, allowing the trichomes to fall through the grate and collect.


The cultivation methods many growers rely on to stay competitive in today’s cannabis market are influenced by science, technology, and economic demand. Hand trimming is valued by many as the most gentle and precise way to remove leaves from buds, but it is not particularly efficient. Large-scale growers who intend to grow their business along with the expansion of the cannabis industry have turned to machine trimmers. Rudimentary automated trimmers earned a bad reputation in their early years, due to their lack of precision. Today, there are still low-quality automated trimmers on the market, but there are also automated trimmers so gentle that the buds they turn out are considered comparable to some hand-trimmed product.

Hand trimming is a centuries-old practice, known for its precision and potential to bring out the most desirable qualities in different strains. This method is still used by individual, small-scale, and boutique cultivators, but is truly a novelty in today’s cannabis industry. Hand trimming is precisely what it sounds like; trimming the leaves away from cannabis buds with handheld scissors or shears. Hand trimming can prevent the loss of trichomes on the outside of buds and allows cultivators to adjust their trimming style to a particular strain’s features, but it takes a lot of person-power and ample time. This painstaking process may be worth the trouble for those looking to achieve an ideal aesthetic suitable for top-shelf bud. Some large-scale growers also hand trim their buds after they put them through an automated trimmer.


Aside from the excess time it takes to hand trim, commercial growers must also consider the monetary factors associated with different trimming processes. Machine trimmers are substantially faster and significantly cheaper than hiring human trimmers.

In the 17th Century, colonists coming to the Americas sailed across the ocean on ships with sails made of hemp and when they arrived, they were compelled by British law to cultivate hemp. By the mid-1600s, hemp was central to New England. Colonists used their hemp crops to produce cordage, cloth, canvas, sacks, and paper. In fact, the first drafts of the Declaration of Independence were written on hemp paper.


Following the Revolutionary War, hemp remained a staple in Colonial American life. George Washington grew hemp crops himself and implored citizens to do the same. Thomas Jefferson bred improved varieties of the cannabis plant for hemp production and invented a special brake for crushing the plant’s stems during fiber processing. Shortly after Jefferson introduced his invention, Robert McCormick, father of the man who invented the first successful reaper, developed a hemp fiber processing device.

When the 20th Century arrived, many hemp farmers still relied heavily on hand labor. GW Schlichten invented a promising fiber processing machine called a decorticator. Unfortunately, the machine never made it to large-scale production. As years passed the hemp industry dwindled, but innovators like Matt Rens continued pushing companies like International Harvester to embrace the mechanization of hemp harvesting. Rens pushed for the use of steam-driven mills and helped design machines that turned stalks where they lay in the field during the retting process.


When machine trimmers first entered the cannabis scene in the late 1990s and early 2000s, they were far from perfect. However, their ability to trim quickly and efficiently was exciting. Ryan Hall invented the first bud trimmer machine in 1997. It was a bulky, clunky wet trimmer that used a vacuum to maneuver buds into a tumbler that removed the trim. The grates and blades in these early wet trimmers tended to damage buds, but these machines could turn out masses of trimmed bud, well beyond the production potential of human hands. But machine trimmers developed a bad reputation rather quickly, and it was for good reason. It didn’t matter if it was a wet or dry bud, the machines compromised the integrity of the flower and often left buds mangled, without many trichomes at all.


However, technology has come a long way since the turn of the century, and many reputable brands and committed companies produce machine trimmers that are almost as gentle as the human hand.

Modern automated bud trimming machines give the grower more control over their final product. Many commercial growers take this into consideration when they decide whether to employ wet trimming or dry trimming in their harvest process. Top-of-the-line industrial trimmers now closely mimic the act of hand trimming; increasing the efficiency of the harvest process and improving the consistency of the finished product by maintaining the natural shape of the dry bud.


While trimming the leaves away from buds with an incredibly light touch, today’s industry-leading automated trimmers (like the GreenBroz Model M and M Lite) can process anywhere from 4 to over 30 pounds of cannabis an hour. They are quiet as a whisper, made of surgical grade stainless steel, and customizable from batch to batch. The simplicity of their design makes setup and cleaning a stress-free process, which is a blessing for those who have struggled to remove sticky residue from the insides of their trimmer.


Today’s best industrial trimmers also preserve machine trim. Trichomes found on trim can make for great extract, and smart growers know they should be taking advantage of as much of their plants as possible.

While the frenzied post-harvest rush to market may still tempt many cultivators to journey down the...

The use of chemical solvents when extracting cannabis oils and other natural compounds from a...

How to Cure Cannabis

Both drying and curing cannabis help remove excess moisture from the buds, which is vital to the...